Curb Rash as a Way of Life

I live right smack in the middle of DC, and I might have a (small, very small) garage with my next house, but right now, it's all street parking. I'd estimate the car is parallel parked around 90% of the time, and between the uneven curbs, constant construction, abutments, etc., I've just had to reconcile myself to the fact that the wheels get dinged. Both my wife and I have gotten much better about it since acquiring the Stinger, but it's still going to happen.

I have two sets of wheels--my winter run on the stock rims, which were powder coated black when I bought the car from the dealer and my summers run on Enkei Raijins. The Enkeis have a light matte to them, and I 'effin love how they look (pic at bottom). The stock wheels are pretty well banged up--each wheel has multiple spots around it where you can see it's been run up against the curb a bit.

(What I really love are the steel-capped sewer covers that overhang the gutter just enough to not be visible but that rip the finish off an inch of your wheel right in the middle of the spoke.)

Other than getting them all repainted each year, any suggestions? I have almost put on those Alloygator rim protectors multiple times (https://www.amazon.com/gp/product/B072XLLB6W/ref=ppx_yo_dt_b_search_asin_title?ie=UTF8&psc=1), but it seems like a huge pain and if the impact is enough to pull them out, you have to redo it (and, obviously, space to work is hard to come by). Should I just learn how to use plasti-dip and take an afternoon each year and do it myself? Not sure if there's a plasti-dip matte, but I'd be willing to try it.

Or, this is just something I'll have to live with? Love to hear from anyone who's dealt with a situation where they parallel parked almost exclusively--just looking for ideas here. Thanks! 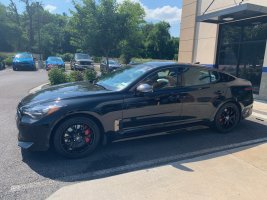 I gave up my crown as "curb rash king" finally. I haven't had an incident in well over a year. Interestingly, I never got any rims rashed actually parallel parking: only when trying to cozy up to a curb in end stalls in parking lots. I agree with the suggestion to use the down tilt on the side mirrors. I'm sure that is what saved me. I did have a couple of near misses; the closest one was probably a couple paper thicknesses away from touching the curb; seriously, it looked like it was touching, but there wasn't a mark on the rim: after those, I learned to be even more willing to just take it slow, and move back out and away and start over if I had any doubts about the clearance. Whenever possible, find a place that you can back into; backing up is far easier in this car than trying to judge where the front wheels are. Hah!
-------------------------------
"Push the button, Max ..."
-------------------------------
GT1 AWD Silky Silver; built in Feb 2018; riding on Nitto Motivo UHP A/S tires in the winter; Michelin Pilot summer tires on TSW "Watkins" Double Black rims the rest of the time; Eibach sway bars, front and rear.
S

Appreciate the feedback. If anyone has suggestions related to wheel care/maintenance/repair, that’s more along the lines of what I’m going for.

You can sand the edge and repaint it - matte wheels are going to be harder to repaint than a glossy one, but check the duplicolour catalogue, and the plasti dip route is an option... just sand the rash with some 400 & 600 grit, and wipe it down with some rubbing alcohol (or paint prep) and touch it up

StingerJefferson said:
Appreciate the feedback. If anyone has suggestions related to wheel care/maintenance/repair, that’s more along the lines of what I’m going for.

Repairing the OE rims was why I went with gloss black powder coat too. When my left rims got rashed all the way around in a damned car wash tunnel (I no longer use tunnels, period), I cut to the chase and stopped the feckless campaign of sanding rash out. I figure that having gloss and matte black touchup kits on hand is the best answer for maintaining appearances.

Should you (for some reason) be without a touchup kit and you get a bad rash (or even one that simply shows and you know it's there and always see it when you walk up to the car), you can always duck into any grocery store and go to the school/office supplies aisle and get a "Marks-A-Lot" for a temporary knocking back of the exposed metal.

I haven't had a really bad rash (that pulls up metal with it) since powder coating my OE wheels and getting the TSW double black wheels: but my plan is to sand down the raised metal and hit the whole aggrieved area with the touchup pen. If/when the wheel is bad enough to require a full repaint, it is either time to do that or buy a new wheel. Interestingly/aggravatingly, after winter 2020 was over, I took my car through the tunnel for one last undercarriage spray (this was the last time I used a tunnel): and even though the boss of the car wash sent my car through the tunnel himself, the LR (not a mark on the front) got rashed all the way around at the ends of the spokes. Pissed does not describe my mood when I got home and saw it. I got out both matte and gloss black and went around and liberally applied them and stood back. Walking up to the car, that wheel does not attract my attention. Good enough! When I asked "my" wheels guys how much it would cost to do the job right, they said, "It will be close enough to the same price as a new wheel, so, when you're ready just get a new wheel." Hah. That was over a year ago and my "good enough" is still working for me.
-------------------------------
"Push the button, Max ..."
-------------------------------
GT1 AWD Silky Silver; built in Feb 2018; riding on Nitto Motivo UHP A/S tires in the winter; Michelin Pilot summer tires on TSW "Watkins" Double Black rims the rest of the time; Eibach sway bars, front and rear.

StingerJefferson said:
Appreciate the feedback. If anyone has suggestions related to wheel care/maintenance/repair, that’s more along the lines of what I’m going for.

I think you should re-title the topic to "Fixing Curb Rash as a way of life" lol. Seriously though, it's nice to know what to do if it happens and how to fix it yourself, but you don't want to be doing that all the time either. The best solution is to never have to get in that situation in the first place and the only way to do that is adjust your approach and use the mirrors to your advantage when parallel parking if you're constantly curbing your rims.

For the most part I have ideal parking situations (garage, no curbs in work parking lot). The garage helps a lot, I can only imagine trying to park on city streets twice daily like you describe, certainly increases the odds for rubbing the tires/rims. IMO it should be a factor in whether or not someone splurges on wheel upgrades. For the same reason I didn't vinyl wrap/xpel the front of the car this time, most of the dings were on the sides (doors/fenders) on my last car and I'm not spending $$$$ to wrap the entire vehicle. If driven daily, expect wear.
Last edited: Apr 7, 2021
2021 GT AWD - Micro Blue - K&N filters, upgraded tweeters, otherwise stock
G

> I think you should re-title the topic to "Fixing Curb Rash as a way of life" lol.

Actually...yeah, probably! I think, though, that it’s probably a weekend a year that I’ll spend doing the work. Maybe two. And that’s ok, I like this kind of work.

The advice here is great, thank you all. What I take away is that some sandpaper (and maybe a Dremel), a good touch up kit and some patience will solve most of my problems. That totally works. I didn’t know if there were some magical better options I was missing or what.

(Like those rim protectors? Not hearing a lot of support there...)

To acknowledge folks that I know are trying to be helpful, we do pay attention to the mirrors, take it slowly, etc. We live on a one-way street that has cars parked on both sides (and was originally probably meant for horse carriages). The car is driven 2-3x/day, usually to places that also only have parallel street parking available. When you’re trying to wedge yourself into a space close to the house with a cab honking behind you and a five month old covered in barf and wailing in the back, sometimes you’re just going to ding a rim.

My wife was nearly in tears after that one, and I’d just rather touch the wheels up once or so a year than have her feel like everything on the car is precious I’ll be angry when those things happen.

So far my only regret about that philosophy is not getting outside fast enough to tell the cab driver where to shove his horn.

> IMO it should be a factor in whether or not someone splurges on wheel upgrades.

One-hundred percent agree. The summer rims were on sale, I think, or had a coupon or something that made them a really good deal. Then I got them, and I realized I like them much more than I thought I would. Hence my desire to take a little better care of them.

Otherwise, the bumpers are somewhat scratched, I’ve got a door ding from my neighbor’s egg-shaped SUV and there are little nicks and bits that are the result of two years of car ownership in this city.

I’m comfortable with touching those things up every once in awhile—some good wax, touch up paint, an afternoon outside. But wheels have always been a little bit foreign to me, hence the ask here.

> I got out both matte and gloss black and went around and liberally applied them and stood back. Walking up to the car, that wheel does not attract my attention. Good enough!

And this is my goal! Good enough. Considering this is a well-used car in a pretty tough environment, I’ll take that as win.

StingerJefferson said:
When you’re trying to wedge yourself into a space close to the house with a cab honking behind you and a five month old covered in barf and wailing in the back, sometimes you’re just going to ding a rim.
Click to expand...